Specially for the babyboomers among CHB readers, here is the final scene from that Oscar winning 1967 movie THE GRADUATE, starring Dustin Hoffman in his shabby Alfa Duetto 1600.

He also races into a black tunnel, just like the Miura in THE ITALIAN JOB, but this time he is not alone on a deserted mountain road and… he goes in on the left hand lane!

Don’t try this in traffic yourself! Click here for this final scene

Babyboomers will remember with nostalgia this great movie and its soundtrack with evergreen songs by Paul Simon and Art Garfunkel like The Sound of Silence and Mrs. Robinson, etc. THE GRADUATE ended with that gripping song The Sound of Silence, see the end of the vid – just great! And for those who want to relive Simon and Garfunkel on stage about 25 years later, here they are once more! 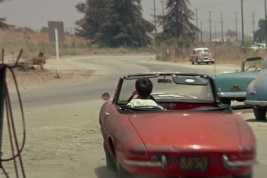