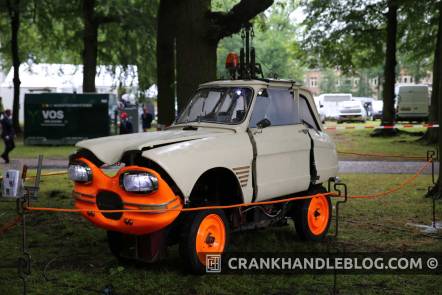 The latest report was all about Amillion and its cheeky performance at the Concours Palace Het Loo, but of course there was much more to admire! Sadly I have not had enough time to see much, but still enough highlights to mention. The gardens of Palace Het Loo are royal, so plenty of choice for everyone, from American bad boys to the most elegant and classy dandies. I guess the most brutal beasts were the RR Merlin V12 Spitfire 27 litre Bentley special, the blue Renault Nervasport des Records (record car) and the little robot car… Sadly I have not seen the little car, which was said to have more personality than Amillion. I heard it was flying and opening its doors and interacting with people, but I don’t know what it is called.

Other great cars were the Bugatti T37 in the preservation class, as well as several other amazing cars in this class that were telling you a story by just looking at them. For me the most fascinating one was the Jaguar SS 1 open tourer from 1936, a car which was found by my dad in 1974, click here for that tale. The evening before, with the party in the gardens of the palace, the new Alpine was exhibited and I liked it quite a lot, especially its mirrors. In front of the preservation class was an amazing collection of beautifully presented Lagondas, and within the gates of the palace there were even more marvels. My fave car was the Toyota 2000GT, but also the Ferrari Daytona prototype, a Detomaso and also 2 great Bentleys, and so on. The Bentleys were a stunning 1932 8 liter Sports Saloon by Mulliner and a 1923 Bentley 3 liter which had also participated in the Mille Miglia this year.

In the field, where the working horses were having a rest, there were also some real great cars such as a line up of unique Veritas cars, all owned by one single Dutch collector. A Bugatti T37, Alfa Romeo 8C 2300, the art deco Citroen B12 Coupe with Sonia Delaunay pattern, and another really fun one, the Brutusch Maserati. This is a motorized children’s racer, carried on the roof-rack of an Opel Olympia of around 1950. The owner found a period photo of this great combination and made the effort to find and to re-unite the two, so a very special piece of history. 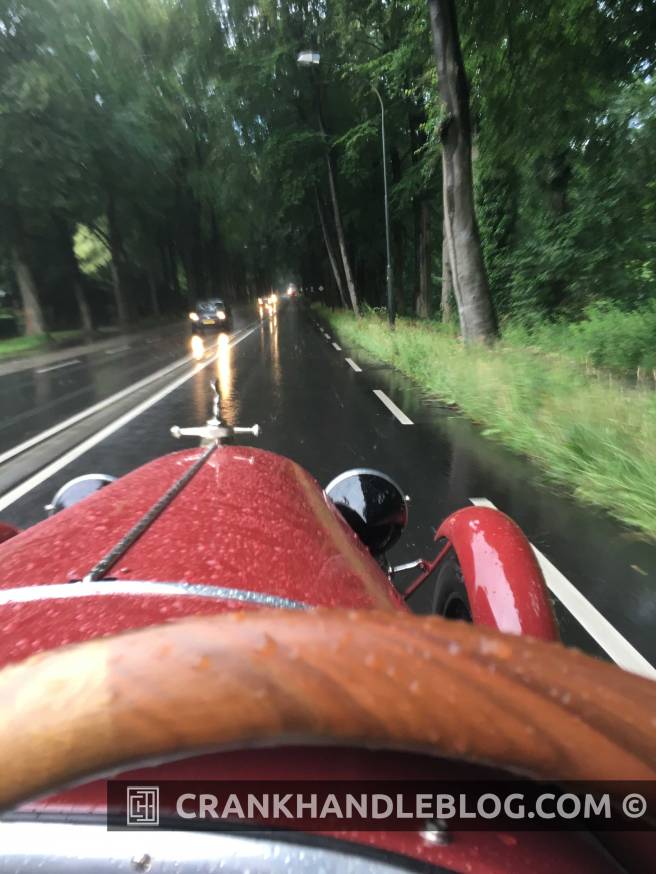 e to condensation problems caused by rain, so the CGS was a little sick
and so was I. But after a push-start and a 40 minute long lap around Apeldoorn in the pouring rain we both felt great again. Dripping wet I took my place in the row for the sprint again. A great day with much chatting, even on the stage. It was a great experience to follow the new Chevies to the big stage in the centre of the grounds and giving a nice little interview to the crowds. Amillion loves attention.

After a lovely and busy day it was time in the afternoon for the moment of truth, the awards were waiting. The best of show was a deserved winner, the very special pre series Ferrari Daytona coupe. I only did not agree that the Toyota 2000GT wasn’t invited to the stage. Next article a slideshow of all the winners just to keep it a bit exciting.

Sadly at the end of the day it was time to pack the CHAPAL helmet and goggles again. But not all that sad, as I was again driving in Amillion a major part of around 40 km return journey thru the great surroundings of the Veluwe forests. Once home a lot of work to do, so the adventure continues and Amillion will become better than before, in preparation for the Alps next September.

(Some pix were taken at the end of the concours, thats why it looks so…)