Last Year, I spotted two Veyrons casually parked just 20 meters away from my house in front of the Montreux Palace. Montreux, Veyron… these words reminded me of one of my grandfather’s souvenirs: The inaugural Montreux Grand Prix, held in 1934. “This is where I met my hero Pierre Veyron. You know, Veyron was a great driver and even better when driving a Bugatti. He even won Le Mans with one” he reminisced, as he went back to the 1930’s, recapping his youth.

The 1934 Montreux Grand Prix? Most of you may never have heard of this GP, but I think that a race in which VEYRON, MOLL, VARZI, TROSSI and ETANCELIN all took part is worth remembering, don’t you agree?

Montreux, where I live, is a kind of Swiss Monte-Carlo which has always been very appreciated by High Society (Napoléon the 3rd, Strawinsky, The Shah of Iran and so on) thanks to its wonderful landscape, mild climate and quietness. Then, one day, some car enthusiasts decided to turn the peaceful historical city center into a roaring and spectacular racing circuit.

The result was a kind of “around the houses“ circuit, constituting of many sharp corners, almost as many as in Monaco. The circuit, in which both drivers as well as cars competed, was rather a short one even by the standards of the 1930’s: only 3.3 kilometres long, due to the small size of our city and also due to the poor quality of our roads (only two main streets were sealed off for the race).

All these elements lead to a very winding and twisty racetrack. The brakes had to be up to the task, putting to the test the drivers courage. The race ran over 90 laps, which accumulated to the short total distance of just under 300 kilometers. 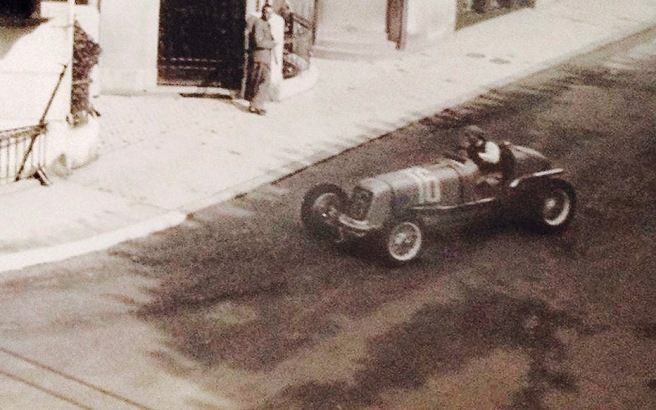 My grandfather told me that the most thrilling part of the circuit was a 90 degree corner on a downhilll slope, that was joining the main street to the lakefront and leading to a near 300 meters long straight. It was the place he chose to admire all his heroes competing. The racing cars took the place of the elegant ladies, who frequented the lakeside, for just that one day.

Despite the fact that the race was held the same weekend as the Eiffelrennen (where the German “Silberpfeil” racing cars made their first appearance), some great drivers and cars decided to come to Montreux. Even Enzo Ferrari entered his best drivers for this ’junior’ race: Varzi, Moll and Trossi. The impressive battle between the Scuderia Ferrari Alfa Romeos and Etancelin’s Maserati was going to make the show. The main opposition consisted of some privately entered Maseratis and Bugattis.

Twelve cars and drivers appeared at the start:

On race day there had been a storm before the race, but the showers didn’t discourage the enthusiasts, quite the contrary. The tiny Swiss Monaco was crowded with almost 30,000 spectators, who mot only fully occupied the grandstand but also every window and balcony along the circuit! Luckily the track had enough time to dry out, thanks to the typical tropical Montreux climate. This race definitely had to be a great show, which it was indeed according to my grandfather’s memories.

The starting grid with Etancelin (16) on pole position

The qualifying race as well as the race itself took place on the same day. Thanks to his great driving skills Etancelin (Maserati) was the one to start the race in pole position, giving the Ferrari team quite a shock. This pole position was a remarkable achievement for a driver who was a private entrant with his own blue painted Maserati (Etancelin also won Le Mans with Chinetti two weeks later ; he was definitely a master racing driver). His Maserati was going to steal the show.

Etancelin took the lead, followed by Straight, Moll and Falchetto. Moll was soon in second position, but on lap 11 he had to do a very long pitstop due to an oil pressure issue. Varzi was doing well, as usual, climbing to 3rd, followed by teammate Trossi.At half distance Etancelin was ahead of Varzi by over 65 seconds, closely followed by Trossi.

With five laps to go Etancelin was still leading by 12 seconds ahead of Trossi, a man who possessed incredible driving abilities, especially on street circuits.  And then there was the notorious weakness of the Maserati brakes, the most important element when competing on such a twisty racetrack. Sadly Etancelin’s Maserati had to slow down because of his poor brakes. The Italian Count understood that Etancelin’s braking issue was his last chance to win the race and he started breaking the lap record lap after lap, improving pole time by one second. Finally Count Trossi passed the French Master’s Maserati on the very last lap! Varzi in his Alfa finished third.

Count Trossi in his Alfa P3 (former Tipo B)

And what about Pierre Veyron, my grandfather’s hero, who was the inspiration for this article? He finished 7th, which astonished me quite a bit. Based on my Grandpa’s souvenirs of this Grand Prix I thought that Pierre Veyron had won the race, achieved pole position and broken the lap record, all of which was definitely not the case. 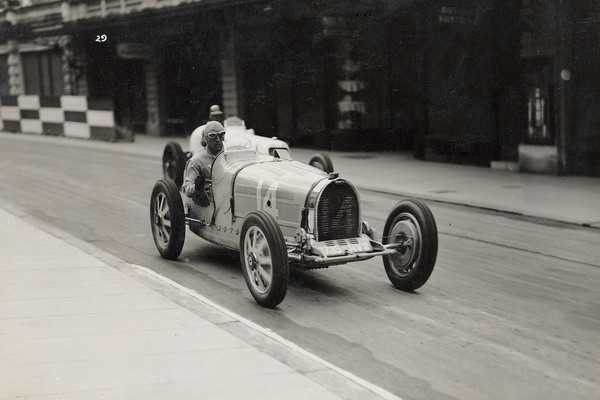 Pierre Veyron followed by a Maserati

I think that in my grandfather’s mind, the most important moment of this race was his meeting with Veyron. After that nothing was more important for him and since the race wasn’t won by a Bugatti the final result didn’t matter, isn’t it? Grandpa had attended many races and had seen Nuvolari, Varzi, Etancelin, Chiron and Rosenmeyer racing, but he was always speaking with enthusiasm about Veyron’s driving style. It took me some time to understand why he appreciated this driver so much, until I read that Veyron’s first win occured at the Geneva GP in 1930, were my grandfather was one of the numerous spectators….

Since the 1970’s several Revivals of the Montreux Grand Prix have been organized and, according to my father, the best one was the 1977 Edition, when Fangio, von Brauchitsch, Moss and de Graffenried made the trip to Montreux, racing their Alfetta GP, Mercedes W125 (the loudest racing car ever according to my father), Bugatti type 51, followed by many more racing goddesses.

But to me the Edition I will always remember was the 2002 one, when I met Mr Fink who showed me his incredible Alfa P3 that once belonged to Count Trossi and had won the 1934 Inaugural Grand Prix…

The very kind Robert Fink in his gorgeous Alfa P3 (which won the Inaugural Montreux GP). “As easy to drive as riding a bicycle“ Mr Fink told me when I asked about the driving experience of his car.