With this article I open this week’s theme ‘Animals’. The car in the picture is a splendid creation of a fish-car. I learned that it actually is supposed to be a dolphin! So, what about this odd and extraordinary Fiat 509A Delfino? My dad saw it once at the Retromobile exhibition in Paris and thanks to my ‘PININFARINA’S FASHIONABLE X FISH’ article (published July 16th), I found the car. The perfect candidate for CHB’s ‘Animals’ theme (and still a bit in the spirit of the one-off cars)!

The Fiat 509A was a very common car in 1925, but if you build a dolphin-like body on its chassis, you get an exceptional car, the Delfino!

The Fiat 509A Delfino was constructed in 1925 by the Martelleria Italiana Riva Panzeri of Milano for a special competition of crafts. After the competition the car was purchased by Giuseppe Bonaldi, the ‘Podestà’ (mayor) of Bergamo. Apparently Bonaldi kept his unique car for only a very brief 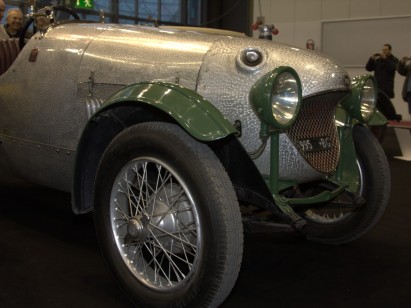 period. The Fascist Government of Mussolini ordered by decree “Ferro alla Patria” (steel for the nation) and ordered that all citizens donate iron and steel to be melted for the war effort. The Fascist Bonaldi donated his Fiat for this cause, but since the handmade bodywork was in aluminum, it was removed, packaged and returned to Bonaldi.

After the war the Fiat Delfino body was forgotten, but later it changed ownership a number of times. Fortunately it finally ended up in the hands of the sheetmetal worker who originally, as a young man, had made the Delfino body in the Martelleria Italiana Riva Panzeri shop. With the help and recollections of its original designer, the fish body was resurrected on an original Fiat 509A chassis and drivetrain.

The dolphin shaped body is entirely built of aluminum, consisting basically of two half-shells welded together. The surface finishing process is called ‘bouchonné’, a process by which a wine-bottle cork is used on a drill to polish small circles. This is how the fish skin appearance has been achieved. A transparent varnish provides the slippery effect of a wet fish skin.

The name Delfino refers to the car as having a dolphin body. However, a dolphin has no scales, whereas the Delfino ‘bouchonné’ body is made to give the impression of scales. So should we call this car the Delfino, or simply ‘the fish car’?

The Delfino is not just an exhibit, but a ‘fish’ that can actually drive on the road. What a pity that it cannot take to the waters and sail or dive, a feature (sailing) that I really like about the Amphicar!

Talking about fish cars, by clicking here you will see some great examples of creativity to turn one’s day-to-day car into the weirdest fish cars!

Tomorrow will be a musical article about how we Dutch people call the Citroen 2CV… the ugly duckling. Plus a mind blowing video, probably one of the most hilarious things you have ever seen, about a French nun behind the wheel of just such an ugly duckling…!

One thought on “GUESS WHAT THIS IS! NO… NOT A REAL FISH, NOR NEMO”