As I was standing in front of and admiring a friend’s Mercedes 500K, the owner told me that wherever he went with his jewel, he often heard people yelling “Oh Hitler is out for a ballade again”, or even worse: “Who could be mad enough to own such an infamous car?”

I suddenly realized that public opinion may associate some of my favorite cars with cruel and devilish dictators who owned likewise models, like in the case of my friend’s 500K. Are these cars to be blamed for the suffering in an earlier life? It’s a matter of opinion, but a car cannot choose its owner, nor its destiny.

Sometimes our beloved vintage cars may have a horrid provenance. Yes, some of our jewels fell into the hands of the worst and most cruel criminals. Knowing their background, should we stay away from them or forgive them their fearsome past? Let’s see who were the crooks who owned these ‘infamous’ cars. You’ll see that sometimes the most criminal and devilish people, who lived on this planet, have owned the most exquisite cars ever built.

I am sure that we all share the same opinion about this vile and cruel individual, but he was a great car admirer, especially a Mercedes afficionado. It is obvious that Hitler was totally crazy about cars, he even designed some himself.

He had always been very faithful to the Stuttgart three pointed star brand. He was always praising his beloved Mercedes 770 ‘Grosser’ and several models were the landmarks of his way to power. He treated himself to the Kompressor delights each and every time he could.

To give you an example: when he was released from the Landsberg prison, he asked one of his sponsors to have a red Kompressor bought for him and he was very proud of his acquisition.

The dictator is reported to have ordered more than 40 brand new Mercedes Kompressor cars in a period of 12 years. To say that he was a good client of Mercedes is an understatement.

He saw his 770K more as a political statement than solely as a car and was very inclined to parade with a great escort of the model to impress the masses. The 770K was at the time his best representative, almost an extension of his terrible political intentions.

Next up we take a look at the next ‘infamous’ car of another fascist criminal. To be continued. 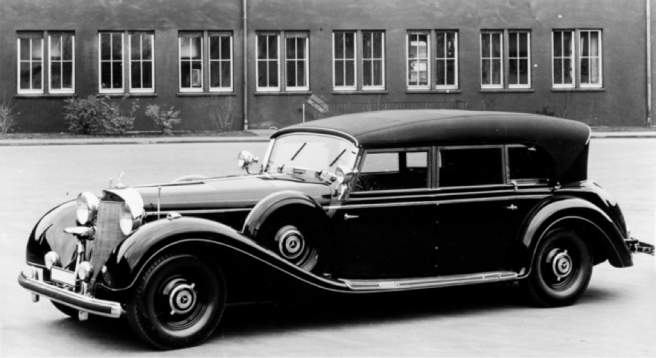