Just being a little hyperactive lately… Looks like blogging about these incredible cars is becoming addictive, and so I just couldn’t resist writing about these very cool vehicles after noticing two of them on the PreWarCar sales page. Both are gone by now because the auction was today…

The announced (hilarious) article of this weekend, with outrageous French high-class cars, will be published tomorrow. So you will have something to enjoy on Sunday too! 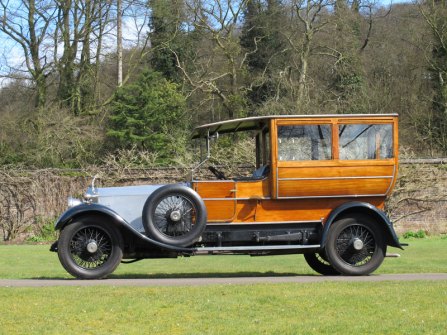 These Silver Ghosts both have a shooting-break body, or as the French elegantly say ‘break de chasse’. This coachwork-style evolved over time and has more than one meaning. At first the term was used for horse-drawn carriages built for hunting. Later the term was also used for motorized vehicles. Early 19th century shooting parties used such vehicles, because they offered enough space for all their hunting gear. Later the term was also used by high-end coachbuilders for custom-built station wagons, which we now affectionately call woodies. I will probably publish a more extended ‘shooting-break’ article later because this subject deserves more discussion!

Meanwhile, what about that ‘spooky’ name Silver Ghost? From 1906 until 1926, 7874 RR Silver Ghosts were built. The car had been designed by Royce with the intent of being the ‘Best car in the world’. As a result of its exceptional technology, silent drive, outstanding reliability and very low maintenance… they sold very well – if you could afford one!

The original name of the Silver Ghost was the 40/50 HP. A factory test-model, registered AX-201, with a Roi-des-Belges body painted all in silver, became known as the Silver Ghost. It was Claude Johnson, the energetic general manager of RR at that time, who first gave AX-201 the name Silver Ghost. The name soon took on with the press and from then on all 40/50 HP RR’s were called Silver Ghost. But the factory only officially adopted that name in 1925, when the Phantom I was launched, which also had a rating of 40/50 HP.

The 40/50 HP was powered by a powerful 7-litre 6-cylinder-in-line engine with 2 valves per cylinder, linked initially to a three-speed gearbox which was later replaced by four-speed. The car has a top speed of almost 50 mph, but later models were faster and there was the fast Alpine Eagle model. During a test drive between London and Edinburgh the average gasoline consumption was 9.68 liters per 62 miles. The engine was a real masterpiece for its time. In freewheel the car turned so soft that a coin could be balanced on its radiator without falling off!

The 1923 RR that I saw on the sales page has quite a nice story to it! So make sure to check it out – the link can be found below. And by the way, both of the Silver Ghosts were hammered down today at H&H’s Burghley House Auction.

While reading the story of the 1923 Silver Ghost one of the things I noticed was that it had cruised around the world, but also that it had participated in several 20-Ghost Club events, which made me curious. Is this perhaps a club of spooky people…? On the contrary… I found that it is the oldest and most active Rolls-Royce Motor Car Club in the world. It is a club for pre-1940 RR’s only.

When seeing the photographs of the 1924 Silver Ghost it seems obvious why shooting parties loved this car so much! It is almost as huge as a bus!