Finally the great day had arrived. On Sunday the endeavour began seriously, as my friend and I were cleaning his Hispano before the judges started their work. I was looking at these wonderful cars gathered in the yard of the Coppet Castle, one of the most significant Swiss castles.  More than fifty automobiles were participating in this event, divided into twelve classes, defined by Chief Judge Adolfo Orsi and Honorary and Chief Judge Ed Gilbertson, the great Ferrari expert. Twelve prizes plus five special ones, such as Best Line Award, Miura’s 50th Anniversary prize, etc., were going to be awarded by the jury to the best car in each class. 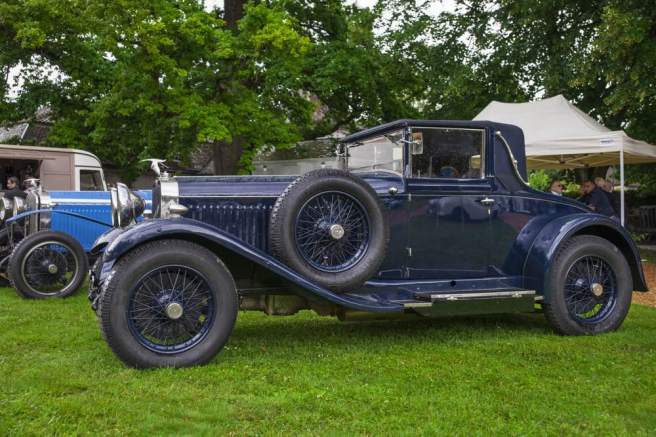 Orsi and Gilbertson were helped by other serious automobile experts such as the legendary Valentino Balboni, the former Lamborghini test driver who came to the concours in the Lamborghini Museum’s Miura, an extremely well restored SV example. Other judges were Antoine Prunet, Raoul San Giorgi, Max Girardo, François Melcion (Retromobile director), Keith Bowley.

Unlike the previous day this Sunday was a public one and more than 1,500 visitors came to admire this open air museum, showing the best examples of motoring art. The judges started to inspect each car painstakingly, paying attention to every single detail; conservation, condition, history, authenticity were the main points drawing their attention.

In the early afternoon, when talking with the organizer Mathias Doutreleau, a spectacular engine music suddenly filled the atmosphere. Mathias maliciously told me: “That’s my little surprise”. His words were the introduction to the spectacular arrival of 14 Bugattis.  “I really like this kind of little surprise” I answered, while admiring these amazing French jewels, which delighted the all the visitors. To me that really was the climax of the day.

But time had come to award the Best of Show and nobody was surprised to see a 1971 SV Lamborghini Miura coming on stage to collect its well deserved award, celebrating the elegance of San Agata Bolognese’s lucky rascal, as well as the 50th anniversary of the Miura. Awarding the Best of Show prize to this car really made sense since the Miura was launched at the Geneva Motor Show 50 years ago and became the first true supercar, a kind of foretaste to the present Aventadors, McLarens, Paganis, Veyrons and Koenigseggs. Seeing Valentino Balboni, the man behind the SV’s development, standing beside his creation was a very moving moment for all the petrolheads in the audience. Balboni looked so happy and proud to see one of „his“ Miuras being awarded and he told us how hard the whole Lamborghini development staff had worked on this car to make it perfect.

This inaugural edition of the Swiss Concours d’Elégance, reviving a tradition dating back to 1927, was coming to an end and this first event was a real success; incredible cars, great organization and a wonderful location showed that this concours has a bright future ahead of it. And so the organizer has already confirmed the dates for the second edition; so come to Geneva on the 18th of July 2017 to enjoy the next Swiss Concours… you won’t regret it.