It is unlikely that you will ever see a 2CV win ‘Best of Show’ at Pebble Beach, but the ugly duckling is for sure a French motoring icon! My parents love this car, especially the 2CV-van is something that brings a lot of good memories to them. Sadly I don’t know any of that because I wasn’t on this planet at that time. The ugly duckling, as it is typically called in Holland, doesn’t have the image of a very appealing car as emphasized by the word… ‘ugly’, but that might just be its power!

People, like my parents for instance, that know this car and have driven it know that this is a very special car and something that no other car can match. My dad can easily enumerate some advantages that the 2CV has… So, go ahead dad, tell us!

Well, here goes, although with some hesitation, because the experience wasn’t one to be proud of. I actually turned a 2CV on its side when the front right brake blocked. This happened while approaching a queue of cars on a country road at the mere speed of 40 km/h. I had just acquired the car second hand for my wife and had to deliver a document to the seller, who had warned me about the brakes needing new linings. So on approach of the queue I decided not to take any chances and put my foot down on the pedal. The car instantly made a 90 degree turn to the right where it came to a standstill in a patch of grass, but… on its left side. The momentum of the turn had made the bootlid swing open and I crept out of the boot over the side windows. There was a queue on the other lane as well and these people saw it all happen and for them it was all like a Louis de Funès film… they had a really great laugh. Anyhow, before the police could arrive I put the 2CV back on its wheels with the help of a couple of the people who saw me as their laughing stock and drove off into a country road as soon as I could. There I checked the damage, which turned out to be very limited. The next day I went to a 2CV scrapyard, unbolted the front and rear wings, selected a proper set from a scrap 2CV with the same colour and bolted these back on. Other than that only a mirror needed replacement and for minimal cost and an hour of work I was off with the damage repaired… isn’t that great? Those were the days! 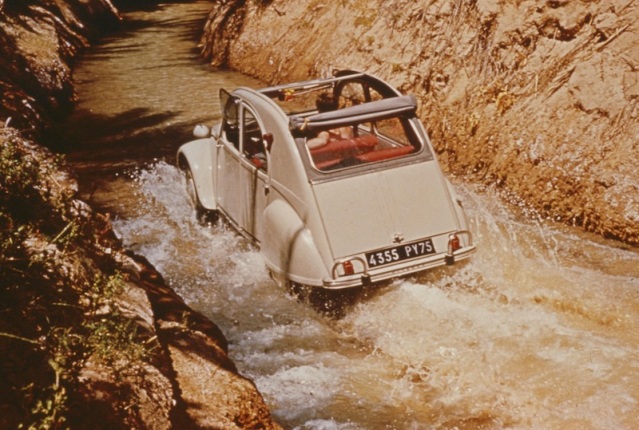 The best part of this article is most definitely this video. Warning!!! This video contains 2CV abuse and is not suitable for infants… This part of the series Les Gendarmes de Saint-Tropez, starring Louis de Funès, is hilarious! I predict that this nun is going to win the next Monaco GP with her ugly duckling ; ) This video really shows how much fun the little 2CV is and, like my dad wrote above, easy to repair just by going to a scrapyard and pick the parts you need, like in a candy store! The simplicity of this car, which allows you to tinker by yourself, is something that now mostly belongs to the past with modern cars made up of black boxes and electronics and computer control… 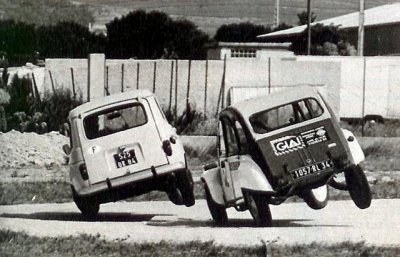 A very neat feature of the 2CV is that you can take a turn almost as fast as you want because of its front wheel drive it won’t get into a spin, but only drift (even with only half of the car left body)! All you need to do to stop drifting is to take your foot a bit off the accelerator. So next time you see a 2CV, jump behind that steering wheel! : ) By the way, I soon plan to introduce the week theme ‘Movie week with Louis de Funès cars’!

Oh, and this one … hilarious!

Wanna see great movies with classic cars? Look for Louis de Funès! Especially Le Corniaud! My all time fave, even after seeing it a hundred times since I was a little girl! The best part of that ‘snorty’ movie starts at minute 36.30! I always repeat that part over and over again… while almost crying from laughing! From minute 54 you will see the best car service ever! But you just need to see the whole movie!

Here is another 2CV and a DS, just couldn’t resist…

Another thing about the Citroën 2CV is that almost every country has its own nickname for the car, which probably makes this THE car with the most nicknames! 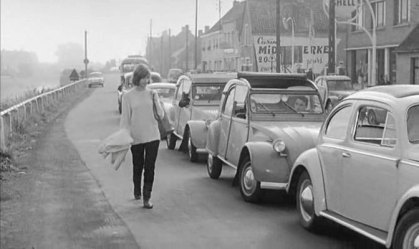 Let’s start with the most used name. 2CV is the abbreviation of deux chevaux-vapeur which means two tax horsepower.  With this name the Citroën front-engined, front wheel drive, air-cooled economy car was introduced at the 1948 Paris Mondial de l’Automobile. The 2CV had a long production period from 1948 until 1990.

The second most used name is the ‘ugly duckling’ derived from a Hans Andersen fairy story. But an even better reason for the name ‘ugly duckling’ is that before World War II, Citroën had a logo with a beautiful swan on it representing the floating motor (Le Moteur Flottant). At the 1948 Paris Car Show, the 2CV was likened to being an ugly duckling amongst the other handsome Citroën swans on show. Another version is that the beautiful Citroën swans had given birth to the 2CV ugly duckling. This nickname appears in many languages, but there is more!

Here is the Dutch Citroën advertising song for the 2CV which was issued in 1959, printed on a cardboard single. The melody was by Charles Trenet and the lyrics by the Dutch Annie M.G. Schmidt. Anyone who bought a new 2CV received the single as a present.

It would not be fair if my non-Dutch readers can’t understand this song, so here is the translation. I am not a singing talent so you have to do it with the lyrics ; ) The song describes the car very well I must say! 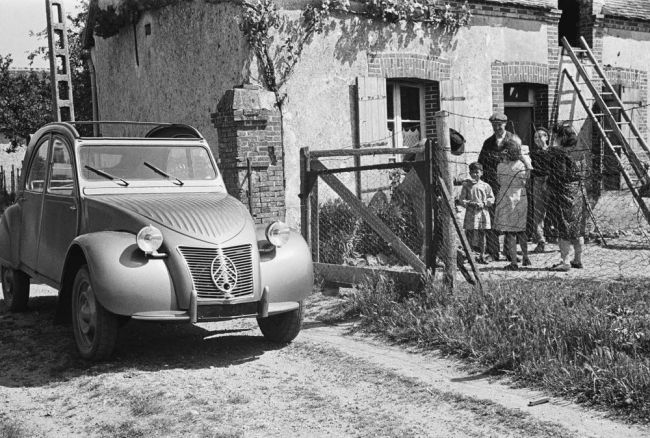 LYRICS OF THE UGLY DUCKLING SONG

We have no dog and we have no cat
For that we are too tightly housed
Sometimes people say: what a pity is that
Then I say: that’s just it
We have an animal that can sleep outside
It can withstand frost and cold
It’s as if that creature is created for us
So friendly it is and loyal
Chorus:
We have a duck that lives with us
An ugly little duckling for the whole family
And always that duckling is going with us
Into the forest and the heath and the sea
A maverick, but nice and lively
Our ugly duckling, ugly but sweet
We have a duck that lives with us
A duckling for the whole family
She is not as proud as the poodle next door
We do not have her for the show
And some neighbors that look surprised
Find our animal only so-so
They would almost be embarrassed with a duckling
We do not care about that at all
No other animal is so well in its feathers
And look at her going there again
Repeat chorus
She practically never needs to go to the vet
She eats almost nothing, is never ill
You can always rely on her and how
She is neither expensive nor fancy
And in summer we explore countries together
Far away in a sunny climate
We love freedom of travel and draw
And freedom is what it is all about
Repeat chorus
A duckling for the whole family.

After this song I want an ugly duckling too! So, dad please add one to our car collection : ) And if anyone dares to insult the 2CV… I will get very mad at you! 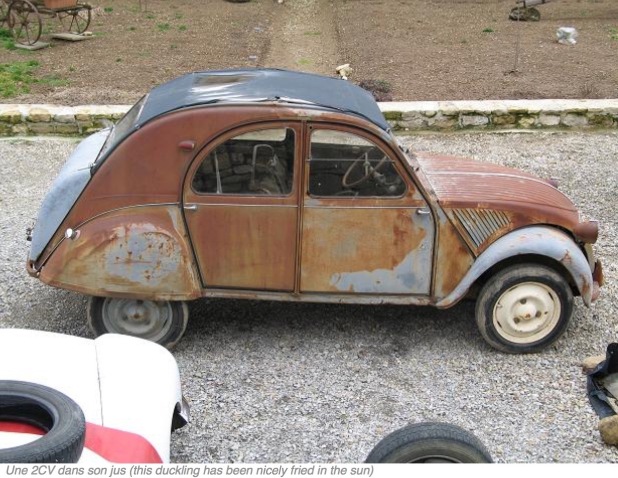 Found this great vid of the 2CV assembly in 1990 (the last year of production), a year before I was born. It is hard to finish an article when all of that great information and vids shows up again and again…

Tomorrow a POTW, I can assure you that it will be a very special one plus a surprising BONUS from space…!

One thought on “AH, MON FILS! THE BIGGEST RACING LEGEND EVER IS A NUN IN AN UGLY DUCKLING!”