This extraordinary ‘Swan Car’ – a 1910 Brooke 25/30 HP – is just all about madness! A bizarre peace of art with its very special and FUN gadgets! Possibly the first concept car in the world! The car was built by JW Brooke and company in Lowestoft, England. It was a combination of both car and boat, which was what the Brooke’s manufactured. By the way it must have cost more than three times a Rolls-Royce Silver Ghost…! By now it’s just priceless! 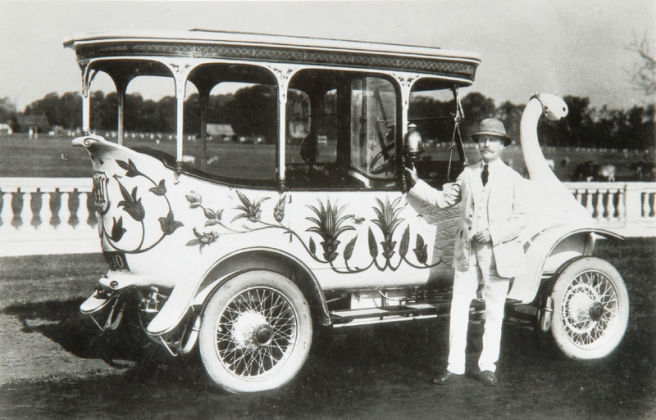 The special one-off vehicle was commissioned by the wealthy ‘mad hatter’ (Alice in Wonderland term) Robert Nicholl Matthewson from Scotland. The genius wasn’t bored when he placed the order for the swan car, but wanted to shock the local elite in Calcutta, India (by that time it belonged to British-India)! That is where the Scotsman lived during the Roaring Twenties.

ody resembled a swan gliding gracefully in the water between fish and golden lotus lilies, an old symbol for divine wisdom. This car has a lot of surprising features, like the moving swan’s beak that can shoot hot water and stream (heated through a connection with the cooling-system of the engine) to clear the road and make people, as well as elephants, run for their life, instead of simply using a horn… Can you imagine?

The floating swan has a division, because as a passenger it was inappropriate to talk to the the chauffeur. But how is it possible to let the driver know where you want to go if you can’t speak to him? Well, there is a ringing ‘telegraph’ that will show the driver if you want to go home, turn, go faster, right, stop, straight, left, go slower… quite smart! The passengers never have to be bored while traveling, because they can play on a little organ-like keypad, which could produce eight different tones. The Gabriel-horn, that is what it is called, works on the exhaust and gets the swan very much alive! 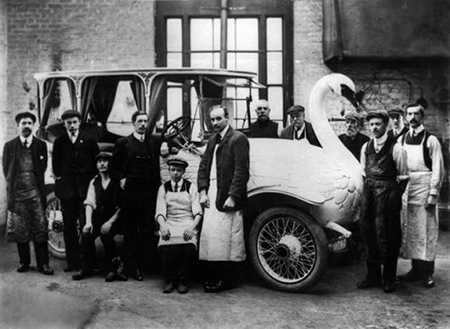 The car has one of the first ever air conditioning systems, a double roof. It isn’t really an airco, but just the fact that it works shows very smart thinking.

The typically Indian decorated swan is a heavy bird with its 6,615 pounds (3,000 kg). The weight is due to the fact that the body was carved from wood and the Brooke chassis wasn’t particularly light either. Especially the giant wooden hood is extremely heavy! 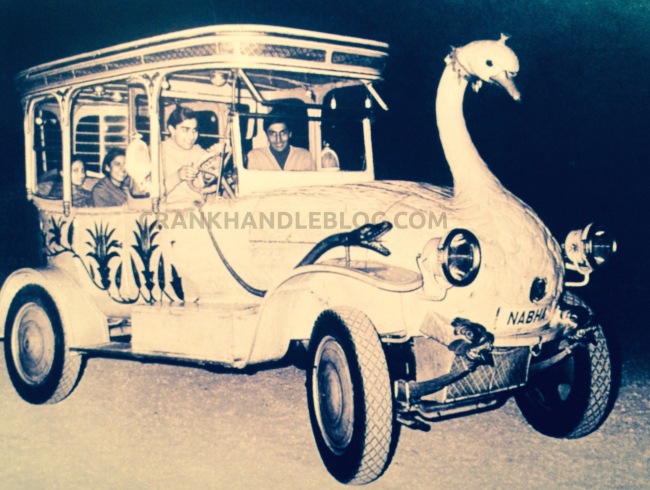 Sadly the Indian police banned Matthewson’s toy from the public roads already after its first ride. This monster of a beast was turning the streets of Calcutta into havoc, scaring not only the public but also the elephants! Especially in the dark, because the swan looks really scary and spooky when its eyes start to glow! It reminds me of a dragon, not spitting fire but hot steam and with evil glowing eyes… The swan has big electric lanterns that suit the Indian style perfectly. 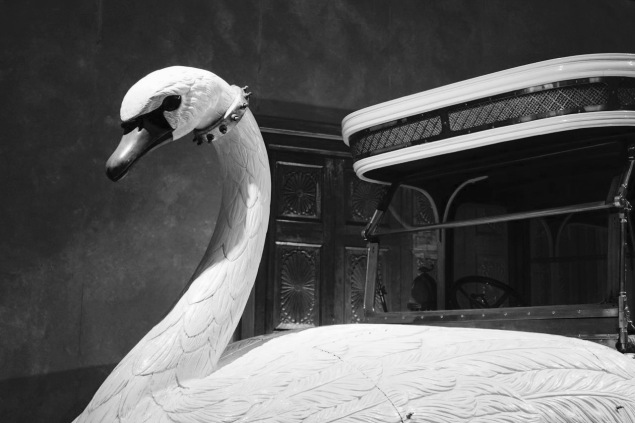 After the fun in the streets was over for Matthewson, he sold the car to the Maharaja of Nabha for an undisclosed sum. Nabha’s love for swans gave him the idea to build a smaller version of the swan car, which is popularly known as the Cygnet. The Cygnet is an electric car and it was built in India 10 years after its much larger mother. The ‘Baby Swan’ is perhaps the oldest automobile ever built entirely in India! The swan car stayed in the Nabha family for 70 years!

By the way, about the elephants… the vehicle has brushes affixed to the wings, to brush the tires and clean them from elephant droppings which was a very common problem in the streets of India in those days.

When the car was found after years of oblivion, it was still in its original condition, but neglected. The expensive Indian silk upholstery had been eaten by rats. In 1990 the ‘Swan Car’ went to a Bonhams auction, where Dutch collector Mr. Evert Louwman purchased it for his wonderful Museum, together with the baby Cygnet! 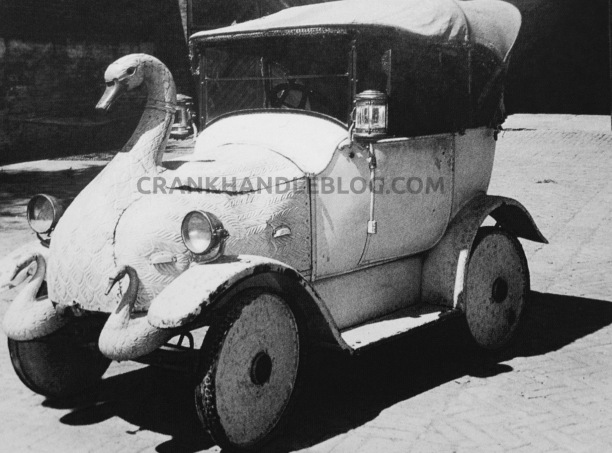 Mr. Louwman brought the swan back to life again! The new upholstery was made by an Indian weaving-shop, exactly the same as the original (a few small pieces of the original had been left by the rats, or perhaps they were just not tasty enough…).

The running ‘Swan Car’, together with the Cygnet, have been on display at the Pebble Beach Concours d’Elegance and in 1993 the ‘Swan Car’ won the ‘Montague Prize’.

It is a car that symbolizes elegance, (Indian) style, eccentricity and creativity at its best!

To say goodbye when you leave with the ’Swan Car’, which is what I will do now, you open the rear valve of the swan which shoots faux swan excrement by releasing whitewash, ingenious!

3 thoughts on “WAS THE FIRST CONCEPT CAR EVER THE BROOKE SWAN CAR?”