Today we will forget all the trouble and look at this gorgeous and breathtaking Alfa Romeo – Scuderia Ferrari. This masterpiece is accompanied by the heroic Mario Tadini. As you might have heard, CHB had some trouble with FB and due to this CHB will not be able to share stories, except on www.crankhandleblog.com and the CHB FB page until Wednesday. This is probably the work of FB and has to do with money, which sadly can destroy great initiatives. I hope that all the CHB readers will continue to support the work of team CHB : ) Please support by sharing this link as much as possible in FB groups, your own FB page, or any other great place you know: https://crankhandleblog.com/news/pic-of-the-week/potw-alfisti-dream-machine-with-mario-tadini-at-the-gaisbergrennen-in-1933/

Let’s make sure CHB is exploding all the social media…

Luckily I became good friends with the one and only Brooke Swan Car and she will go and visit to the FB headquarters to steam them all out with hot water, perhaps even a bit acid added to the water. But since I am a nice and forgiving girl, we now forget all of this and focus on positive things again. CHB had to pass a test and all of the CHB friends proved that together we can beat anything. Like one of our friends said, let’s crank that handle again!

Here is a picture that can benefit from some identification. I am sure the Alfisti among us will know more details and please don’t hesitate to share them in the comments. What we can conclude already is that we see an Alfa Romeo racer of the Scuderia Ferrari family. What is the actual type? I let you investigate, but it could be a Monza perhaps? So, your task to find out what the exact type is. This is just one stunning pic of a little weekly POTW episode and all of them have two things in common, Das Gaisbergrennen in 1933… speak out loudly in Austrian, just because that makes the story more complete : ) Secondly we see the driver, Mario Tadini. This driver from Bologna (1905-1983, reaching the age of 78 is not bad for a race driver), was not just one of the Scuderia’s drivers. He was an entrepreneur who ran a chain of clothing stores during the 1920s. Now the best part, he was co-founder of the Scuderia Ferrari!

It all stated in 1929 on a winters day, while having a fine dinner in Bologna. Mario did not only have a great evening, he had also done a great deal. This was the fresh beginning of an ambitious plan… The set up of the Enzo Ferrari racing team and he was there to support, like you now support CHB : ) Mario was already known as a talented amateur driver, having achieved some fine success before WW1. He continued to do so and was a successful privateer in many races next to being one of the founders of the Enzo Ferrari racing team. The team was founded in 1933 and went on to win many races.

During the 1930s Mario won among others the Hillclimb Grand Prix of Austria at the Großglockner in 1935. In 1933 he won the general sports car title at the Stelvio (which is also the name of a magnificent T57 model, as you probably already know) and went on to win the European Hillclimb Championship. In 1933 Mario was again in full strength at the Gaisbergrennen and the International Semmering race. He won the European Hillclimb Championship for Touring Cars, making an impressive overall CV!

After the war, he tried a comeback and drove some races in the Ferrari 212F2, before he finally retired from racing in the mid-50s. Let’s honor this hero of the Scuderia Ferrari, because without him we would perhaps not have known about this great man. Building up a new racing team must not be easy, like it is not easy to build a successful vintage/classic automobile blog ; )

Vive CHB and the Scuderia heroes, and thank you all for the great support, you are the best! : ) Lets keep history alive, lets spread the word! Insha’Alah, as one of the readers whisly tells me and okay lets add habibti to it ; ) 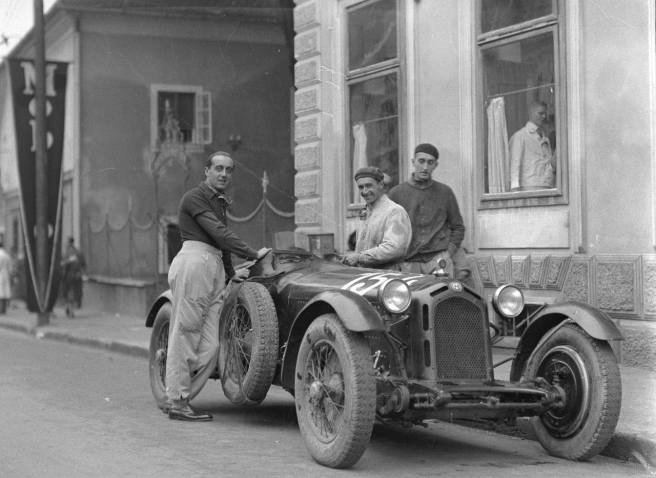