Barney Barnato brought his three nephews Jack, Woolf and Solly Joel into the business, but this may have lead to his death…

With that said, Barney becomes even more interesting when looking at his death in 1897. At the time Woolf was only one or two years old. The death of Woolf’s dad has been announced as suicide, but rumors went around that it was actually a murder because of some mysterious circumstances… The waters between South-Africa and Londen are the only ones which know if Barney drowned himself, or if someone else pushed him overboard. This accident happened when Barney, his wife and three children, of which Woolf was one, were on their way to England for a holiday in their fatherland. Beside his family, nephew Solly also journeyed with them. One of the rumors is that Barney was on deck with Solly and that they were arguing… Did Solly push Barney, or was he trying to stop Barney from jumping? Did Solly have a motive to commit a murder? Personally I don’t think it was suicide, because two other things might suggest that it was a murder committed by one of Barney’s heirs, Solly…

First of all Barney’s other nephew, Woolf Joel, was shot and killed a year later in his business offices in Johannesburg by a blackmailer.

Secondly, Barney’s will, after provision for his wife and children, stated that the company should pass to his surviving nephews. Jack Joel was accused of illicit diamond buying, a very serious charge in South Africa, and fled to England to escape trial. Woolf Joel was killed and who was left to inherit?… Solly Joel, the mustache man holding the horse below. Perhaps Solly Joel had hatched a clever plan to steal the throne from Barney, whose murder happened as Solly Joel became in control of the company. Bad people can be so clever! 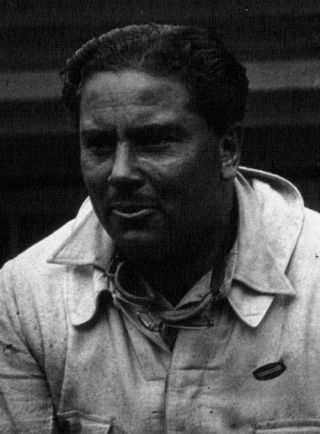 So now that Barney has been sacrificed to the sea, Woolf takes over the story again. Today we recognize the playboys by their impressive supercars and golden necklaces (I try to help your imagination…so I exaggerate). Barnato obviously was also such a kind of supercar playboy, but instead of golden necklaces, which wouldn’t have been inappropriate for a gold/diamond mining heir, he looked mostly very cool in his racing costume, covered in dust and dirt. Perhaps a suggestion for the trend setting playboys of today, because the golden necklaces are so dated ; )

I am gaining respect for this famous playboy each minute I learn more about him. Should I consider him as a role model? I am not sure, but perhaps the younger Barnato does, more about that later.

Woolf Barnato was a very exacting guy who wished to excel in every possible way. Like his dad, he boxed and knew from his dad that “The bigger they were (his opponents), the better he liked it”. Next to boxing, Woolf also did motor boat racing and collected prizes, including the 1925 Duke of York Trophy. This sport was already making him a bit of a Bentley Boy as his ‘warship’ was the Bentley-powered ‘Ardenrun V’ boat. Of course he was a keen shot as well, no question about that. The list goes on and he also knew how to breed horses and of course to hunt. To keep his body in playboy shape, he was a strong swimmer and he played tennis, golf and cricket, all with the same exhilarating drive of course.

The big Woolf later became Chairman of Bentley Motors as we know, but before that he served as an officer in the Royal Field Artillery of the British Army during WW1. Serving in France, Egypt and Palestine, he was able to excel again and attained the rank of Captain in the later stages of the war. In 1915 he was given leave to marry Dorothy Maitland Falk, the daughter of Herbert Von Falk, a New York stockbroker. There were two daughters from this marriage, Virginia and Diana, but it ended in divorce.

Can we conclude that he was a perfectionist in addition to his extrovert personality? I like the slightly arrogant Woolf already and I have not even talked about cars yet…

With that said it’s time to accelerate! How do you become the king of Bentley Motors?

We now know the fundamentals how to keep this story interesting and exciting, because the last thing we want to see is it collapsing (which will probably never happen). But this is still not a guarantee for a happy end…

Sometimes you need to dig deep in history to get the full picture and I believe that the Woolf of London town is worth the digging. Get ready for part 3, because it will be fast and furious. But first we’ll visit THE Dutch exhibition, Interclassics at Maastricht. For me it was a very very special day…