The 40HP Lanchester was very populair amongst Indian Royalty, so let’s talk about those Lanchesters and of course Lanchester himself! 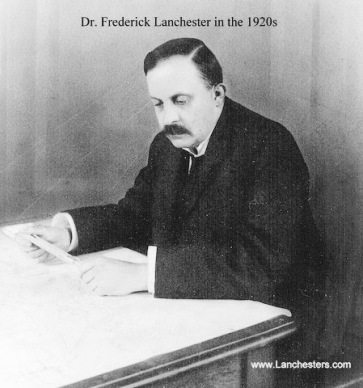 Frederick William Lanchester, or Fred as he was called, was the founder of the Lanchester marque. The incredibly gifted engineer and designer was holder of some 426 patents! His 1896 Lanchester Engine Co. was the first car that he built. He also wore the honor of building the very first British four-wheel vehicle with internal combustion engine. Early Lanchesters had midship-mounted, horizontally opposed, twin-cylinder engines. Four-cylinder cars followed in 1904, sixes two years later. Fred found the Whitworth fasteners, the mainstay of British industry at the time, too crude for his liking, so fashioned his own precision Lanchester M-threads, used on the cars until after World War I. His Lanchester vibration dampener, a device that would be adopted by virtually all engine manufacturers, was patented in 1910. Customers of his were British Kings George V and George VI and of course Indian Royalty! And as we know now, after yesterday’s article, the Maharajas loved ordering Fred’s cars with gold or silver platings.

Apex of the company’s product line was the Lanchester 40HP model, introduced after the first World War at the 1919 Motor Show in London. A scoop because this was the very first post WW1 car show! The 40HP had a massive 139-inch wheelbase and was powered by a 6.2-liter ohc six. This car was a strong competitor for the Rolls-Royce Silver Ghost, even though it was £100 more expensive (at a time when the pound equalled $3.50). The Lanchester was yours if you paid £2,200, which was only for the chassis. If you wanted a fully bodied car, you had to add £800 to that. 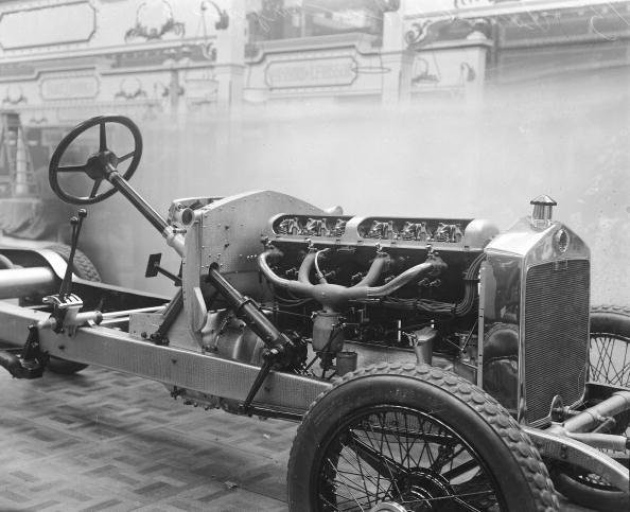 If the looks of the Lanchester weren’t intimidating enough, the purposeful looking car was able to reach a top speed of 80mph (129 km/h). Not bad at all for that time! And on top of that an extra added advantage were its four wheel brakes.

Lanchesters were quite popular with the Maharajas, like with Maharaja Jai Singh of Alwar and his son Tej Singhji, as well as the Maharajas of Gondal (he owned several Lanchesters, below one of his Lanchesters now owned by Mr. Vijay Mallya), Jodhpur, Kolhapur, Rajkot, Rewa, the ‘unknown’ South Indian Maharaja and the Jamsahib of Nawanagar (Jamnagar) to name some. 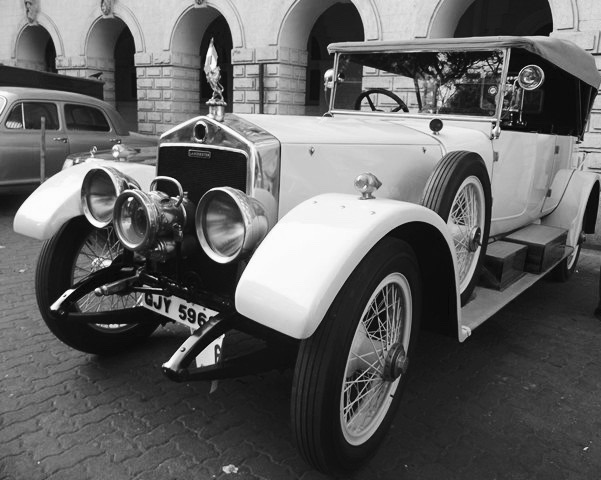 My eyes caught a stunning photo in the book ‘Automobiles of the Maharajas’. It is the massive 1924 Lanchester 40HP Coronation Coach of Sir Jai Prabhakar Singh, Maharaja of the 15 gun salute state of Alwar. He ruled the State from 1892 until 1933, when he was exiled by the Britsh Government. The photo was taken with Maharaja Sir Tej Singhji as proud passenger! Lucky heir he was! Like me, he must have got his automobile interest from his father, because one of his dads greatest passions was buying expensive, flashy cars and having them modified to suit his taste. 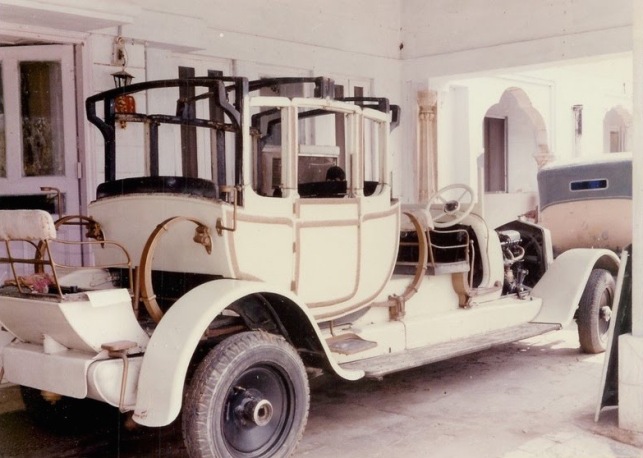 The “Lanchester 40HP Coronation Coach” was exclusively made for Maharaja Jai Singh. A combination of a car and a coach! The carriage was built on an extra-long chassis and this one-of-a-kind car did get noticed! The Maharaja’s car became so popular that it was featured in the American magazine ‘Popular Mechanics’ of October 1924. A ‘coach’ car that showed-off the daring Indian eccentricity! 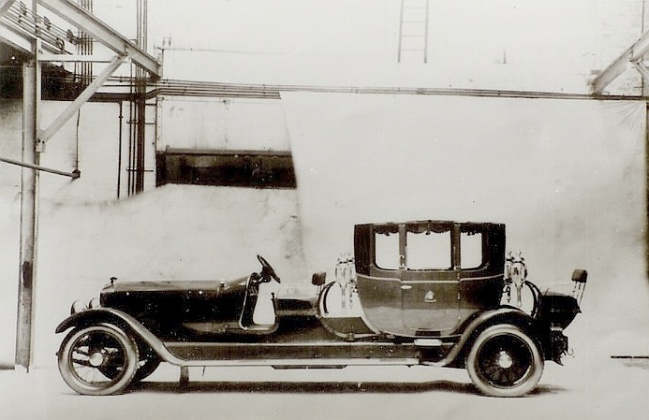 Another Maharaja who favored the Lanchester marque was HH Jam Sahib Ranjitsinhji Vibhaji Jadela of Nawanagar (Jamnagar). To make it a bit easier for you, he was known to the cicket world as ‘Ranji’ (ruled 1907 to 1933). Together with his successor Digvijaysinhji (ruled 1933 to 1966), they were both the largest buyers of the Lanchester marque.

One of Ranji’s Lanchesters was a massive and luxurious 21HP 6-cylinder 6-seat touring car that he bought in 1927. He probably started to collect cars of this make with a 12HP model, which he bought in 1905 and 18 or 19 other Lanchesters followed! His successor bought in 1937 a Straight-Eight Lanchester with a Philco car-radio. In the 1940s he ordered some special DE 27 Daimlers with Lanchester radiators.

It is not without a reason that ‘Ranji’ favored his Lanchesters so much… He owned shares in the Lanchester Company and even more importantly, Fred Lanchester was a dear friend of his and he enjoyed many visit to see Ranji in India! Like most Maharajas, Ranji had his own schedule for ordering cars. Occasionally he ordered Lanchesters in threes, of which perhaps a coupé, a tourer and a four-door sedan, but definitely all in his personal color combination: light blue and silver with moldings depicting flamboyant flashes of lightning on the sides and matching blue fog-lights at the front. Sometimes he ordered six or seven cars of the same model, like it was nothing! Such as the Straight-Eight series and all with different body styles, painted in the same colors, which were used only in his Lanchesters!

Shown below Ranji’s eighteenth Lanchester, a 1936 4,5 liter drophead coupe sports body styled and built by Vanden Plas. Even though Daimler had stopped manufacturing the Lanchester Straight-Eight, they built six special Lanchesters for HRH The Duke of York and this Maharaja as they were staunch Lanchester enthusiasts. 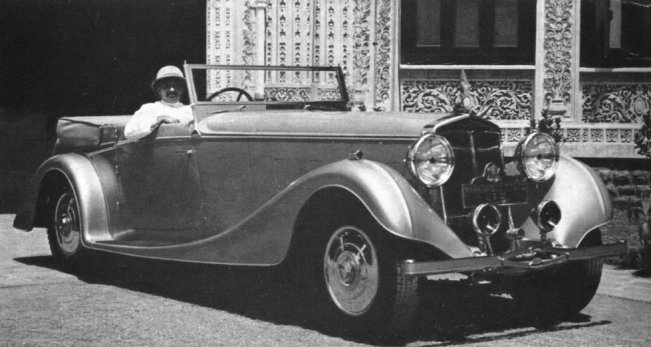 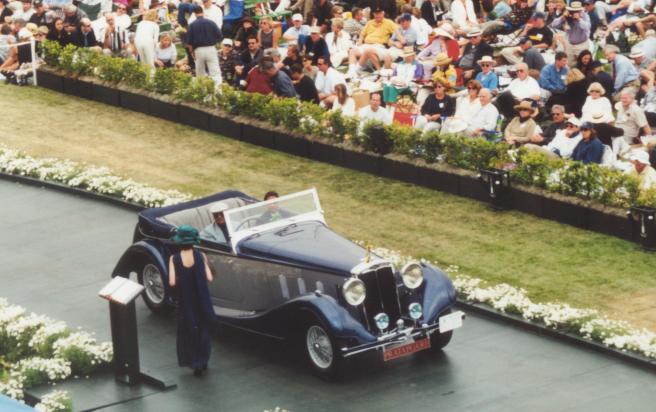 There is this short letter, written by the motor superintendent to the Maharaja of Nawanagar, sent to Lanchester: “The three 40HP Lanchester cars which His Highness bought, two in 1922 and one in 1924, have been run over 60,000 miles under all sorts of conditions in India and England. It would interest you to know that I have a fleet of over 60 high-grade cars of different makes, including Lanchesters, ect. Therefore I am in a fair position to judge their merits. The Lanchester is easily the best car I have under my care”.

In 1937, the Lanchester Motor Company shipped a fine six-seater touring car to Madras, perhaps for one of the South Indian Maharajas who wanted to stay anonymous. So that was the unknown Maharaja… This ‘unknown’ car had triplex glass windows, which could be folded away into the doors. When they were closed the tourer became a saloon. 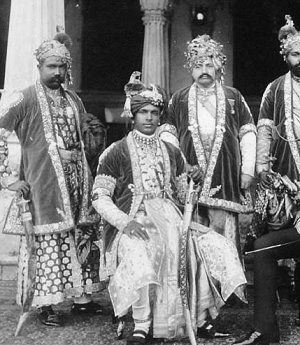 ONCE AGAIN over to the Maharaja of Alwar! Because the most magnificent Lanchester that grounded in 1924 in India was definitely the 21HP ‘baby’ that Maharaja Jai Singh of Alwar ordered in 1921. From order to delivery took no less than three years! The custom-built Lanchester, which was a true copy of the British coronation coach, had a gold-plated radiator as well as gold carriage lamps (typically Maharaja style…) The incredible double-opening ceremonial state-landau body, resting on C-springs, was especially built for HH on an extended 14 feet 10 inch long chassis and finished in royal blue with gold. The car had a low ratio axle gear so that it could be driven in state processions at slow speeds without overheating, but it could also cruise along 55 MPH. 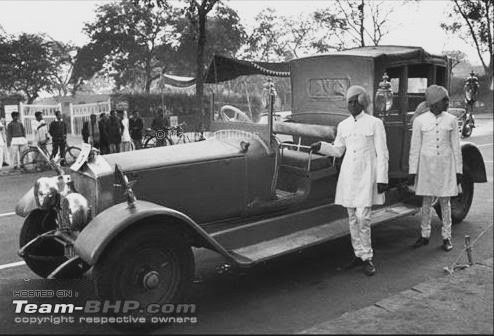 The most spectacular death connected with a car was that of Maharaja Jai Singh. His extraordinary Lanchester carried him on his last journey. This exceptional car, which still exists in Alwar today, was also a Bollywood star. It featured prominently in the Merchant-Ivory production Shakespearwallah in 1966!

Next article will about the quirky Maharaja of Alwar and my absolute fave story of some RR garbage cars!

One thought on “THE INDIAN LANCHESTER CAR HYPE”