“… there are few of us really who do not admire something which carries a real suggestion of power and speed.” – Invictas sales brochure introducing the S-Type.

Looking at dozens of photographs of S-Type Invictas, I have often considered just what it is about such a precise and subtle combination of shapes that result in so satisfying a presence. The overall effect is a compelling mixture of tradition and originality, of an attenuated outline and an intense refinement of detail. And it does, in fact, carry “a real suggestion of power and speed.”

The strongest initial impression, most would agree, is made by the strikingly low overall profile. Measuring from the top of the scuttle to the ground and from the leading edge of the front wings to the trailing edge of the rear wings, the proportion is close to 1:4. The wheels and tires provide a strong visual clue to how low the profile actually is: they are tall but not oversize, so they measure the height without exaggerating it. There is no forced effect as there is on so many modern cars with very tall rims. The wings for those tires are the next measure of that low profile; the bonnet line in front and the tonneau in back rise above the wing height approximately the same amount as the thickness of the wings themselves seen from the side – the smallest logical increment.

The side elevation of the body is divided very subtly by the top edge of the valence which runs along the bottom and sweeps upwards and widens slightly just behind the front wheels. The sweep of the bonnet as seen from the side is balanced by the line of the valence because it widens in the opposite direction, that is black from the radiator to the scuttle. The high-line of the bonnet, emphasized by the polished hinge itself and the double row of rivets, carries through from the radiator to the back of the tonneau on the passenger side of the car. On the driver’s side, it functions just as effectively as a design element because, it can still be seen, from the inside, where the driver’s side is cut away. This unified asymmetry is one of the most sophisticated elements of the design. Equally important to the overall effect is the fact that this long assertive line is punctuated at its visual center by the windscreen, which provides a strong accent whether or not it is folded down. That this line begins behind the hubs of the front wheels and extends beyond the hubs of the rear wheels result in a look like an arrow in a drawn bow. 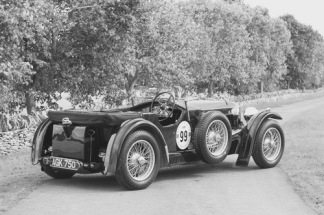 Viewed from the front, the car is quite wide, but is prevented from looking squat by the curve of the bonnet., which becomes increasingly parabolic the farther back it is from the radiator. From a wide-radius curve it is modulated into a rounded peak at the scuttle. The shape is strikingly emphasized by the straight horizontal of the windscreen tangent to it, the gaps on either side filled by triangular window segments. The double mesh radiator grille gives the impression of a transparent shimmer, but the shape itself is strong and direct. Next to it a Rolls-Royce grille looks simple-minded, and that of a Bentley or a Lagonda looks clumsy and obese. Among radiator grilles of the period, only that of a Bugatti has a strong and visual impact.

Although the back of the car may be more conventional in that its elements are typical of the period, the fact that the slab gas tank is tucked in low between the rear wings contributes to the crouched look which characterized some of the best-looking later sports cars, but was rare when the S-Type appeared.

Apart from the low profile and refined proportions, to me the most handsome elements of the design are the front wings. These are an original shape which is neither a cycle fender nor what is a sometimes called a helmet fender, but something in between. The shape is flamboyant –  in both senses of the term. They appear to spring organically from the side valences and reach forward dramatically to the front ends of the dumb-irons. This may not be aerodynamically efficient, but it results in a look of consummate grace and power. 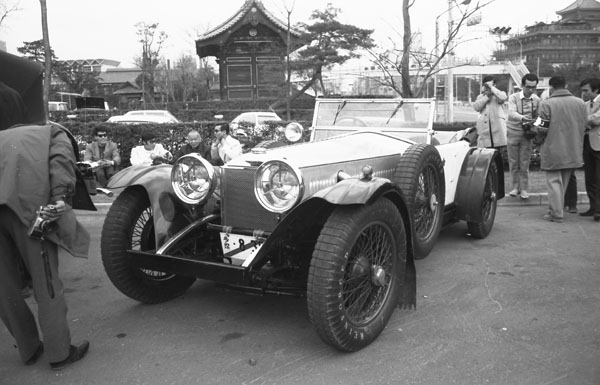 This type of wing doesn’t appear on every S-Type, but sometimes shows up on body types other than the 4-seat tourer, including the comparatively formal Salmons DHC (S-161).

Two other design elements are so obvious that they might even be overlooked: the twin chrome-wrapped exhaust emerging from the bonnet and disappearing into the valence on the passenger’s side – clearly symbolic of power, and the single spare wheel on the driver’s side, inconvenient, perhaps, but very rakish.

The whole package holds together so well and is so beautiful that it can be painted almost any color, or combination of colors, and still look good.

All of the above may be old news to S-Type owners, but there is a certain satisfaction in putting into words what one is no position to enjoy on the open road. I leave appreciations of performance to those behind the wheel.