Again an ‘aerticle’ related to this week’s theme of aerodynamics, this time a windtunnel tested rocket-like turbine engined concept car! 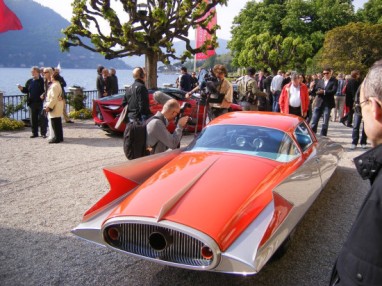 In 2009 I was lucky to visit the Concorso d’Eleganza Villa d’Este at Cernobbio on Lake Como in Italy. Although I was a bit disappointed that Ralph Lauren didn’t show up with his magnificent Bugatti Atlantic, this was more than made up when I saw this Ghia Gilda spitting fire. I was so thrilled by this car that It immediately made me forget my disappointment! I couldn’t find pics with the Ghia Gilda and the enormous amount of heat released by its exhaust, but you can see this rocket-like car spitting fire by clicking here.

For me this is a very nice subject to write about, because the Ghia Gilda brings back nice memories that I share with my dad. Also the journey to the actual Concorso d’Eleganza was great. We delivered a very special 1932 Alfa Romeo 6C 1750 GS Touring spider to the concours, but our transport – an Iveco truck – was far from a luxurious modern car with cruise control, ect.

Thinking about that Iveco it also brings back good memories, such as driving for miles on miles as a piggyback in the lee of much larger trucks or busses through the mountains – which wasn’t easy for the loaded Iveco. Another terrifying adventure was hanging above the abyss in a hairpin together with a Brescia at an extinct small mountain road…! They say the journey is more important than the final destination, but once we reached Cernobbio I quickly changed my mind!

But enough for now about my adventures and good memories. We are here to talk about the one-off Chrysler Ghia Gilda Streamline turbine-gas-engined X Coupe Concept car that can light your ciggies! A mouth full! A rocket-car that set the world on fire in the mid-fifties, because it was so extreme at the time with its high revving and hot jet engine and the looks of something that was about to take off to outer space…

At the time, the jet age was really hot (literally) – just look at the dream cars with wings, fighter-plane like tails, and transparent canopy tops such as Ford’s FX-Atmos (1954), Lincoln’s Futura (1955, also built by Ghia), and the turbine-powered GM XP-21 Firebird (1954). This was the age when jet fighters were the technology icons and tail fins for cars bodies were just being introduced. Since most American families had already owned cars for a couple of generations, their dream cars looked more like rockets or airplanes and less like cars.While the jet theme also influenced the Italians to some extent, they felt more that cars had to look like cars.

This 1955 built concept car is the coolest Chrysler ever made, don’t you agree? The

non-running, fully trimmed prototype was built for the 1955 Turin Motor Show as an experimental body. It was the undisputed center of attention at the Show. Apparently the people at Ghia in a rush, because the car had to be taken to the Show.

The shape of the Ghia Gilda was so harmonious and the concept so futuristic, that when it appeared on Motor Trend’s September 1955 cover with the headline “The Engine-less Ghia X, ‘X’ for Chrysler’s Gas Turbine?” no one doubted that such an engine also powered it! But in actual fact the jet engine was only installed in the car several decades later by its restorers. 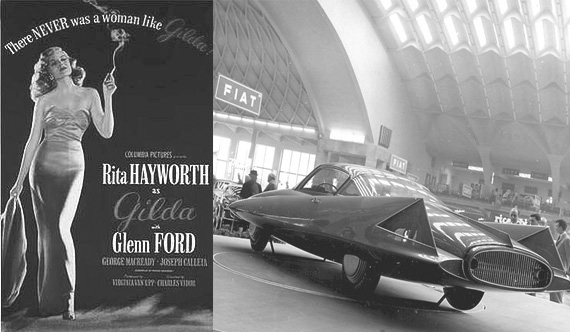 If you have a dream of driving an aircraft, the Ghia Gilda offers great fun! Its drivetrain consists of a hydrostatic automatic gearbox. It has no headlights and a huge inflammable exhaust pipe. This car is the ideal illegal dream for a highway speed control! Not that they would be able to catch this rocket of course once its engine is revving at 10.000 – 13.000 rpm ; )

The distinction of airflow experimenting (managed by large wings or wind-directing buttresses) belonged for a big part to Italian engineer Giovanni Savonuzzi and his avant-garde Cisitalia CMMs of 1947. Savonuzzi worked in Fiat’s aero engine testing division, and became Cisitalia’s technical director in August 1945. The CMM’s aerodynamic

s were so impressive that, even though the car’s 1100cc four-cylinder power plant produced just 61 hp, it cleared 125 mph in testing and placed third overall at the 1947 Mille Miglia. The model later became known as the Savonuzzi Streamliner.

Savonuzzi also had a very significant and unrecognized role in designing the seminal Cisitalia 202. He left Cisitalia in 1948 to form his own design and engineering consultancy, then took a second job as a lecturer with the Turin Politecnico. This assignment guaranteed access to one of the few windtunnels in Italy. In the 1950s, a consulting client of Savonuzzi’s was Carrozzeria Ghia, which in 1953 constructed the body for an intriguing one-off he had designed for his friend Virgilio Conrero, an Alfa Romeo tuner. This was to open the door to what came next…

See Part 2, which is due soonest. 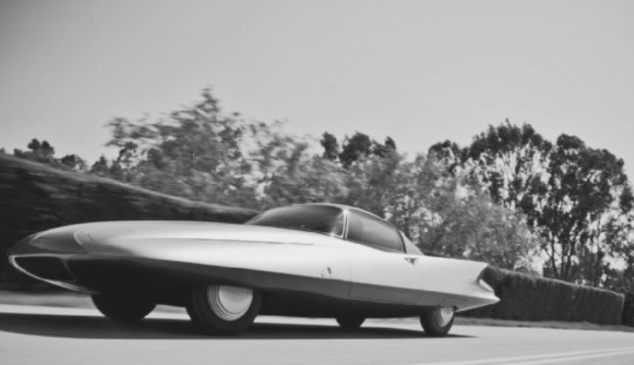 One thought on “OUT OF THE WAY! THIS ROAD-GOING JET SPITS FIRE! – PART 1”