Colonel HH Raj Rishi Shri Sawai Maharaja Sir Jai Singhji Veerendra Shiromani Dev Bharat Prabhakar Bahadur of Alwar, was quite a striking Maharaja with some really crazy stories (the one of the Rolls garbage vans is the most bizarre story I have ever heard)! If you have read the previous articles you already know something about this brilliant and eccentric Indian Prince. Shown left the Coat of Arms of Alwar.

Jai Singh (1882-1937) succeeded his father in 1892 and ruled Alwar until 1933. He came on the throne of Alwar when he was quite young, only 10 years old! Initially he reigned the 3,213 square mile state of Alwar in Rajasthan under the control of a Regency, until he was able to carry the full ruling powers in 1903.

In 1921 Jai Singh was worth a personal salute of 17-gun-shots. Sadly for him, in 1933, he fell into disgrace and he was removed from executive authority by the British Government. He was banned from within the boundaries of Alwar for the rest of his life, sounds almost like a kind of death sentence… Now that residing in Alwar wasn’t an option anymore he went into exile in Paris. This is also his terminal destination where he died on 19th May 1937. Jai Singh was succeeded by his son Maharaja Sir Tej Singh. 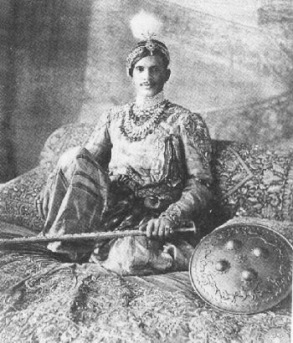 There were quite some rumors around Maharaja Jai Singh, some had a hint of truth, others were mere figments of the imagination. But it is true that he was one of the biggest spenders of Indian Royalty! Obviously he favoured the Hispano-Suiza marque, because he was the single-largest owner in the world with more than 15 models! Several of his Hispano-Suizas had an extended wheelbase and of course all had different coachwork, but his favourite was the 8-liter H6C series as you can see in the previous article (POTW).

Jai Singh’s preference for Hispano-Suiza above its competitor, the Rolls-Royce, might have originated after this bizarre story took place! The Maharaja, who used to stay at the Mayfair Hotel in London, one day wandered into the nearby Rolls-Royce showroom and was spoken to rudely by a salesperson who thought him too shabby for a Rolls. Fuming, the Maharaja ordered seven Rollses and turned them into garbage collection vans at his home state in India. Rolls-Royce were appalled and apart from profuse apologies, reportedly gave him a few cars in exchange for restoring the garbage vans to their appropriate glory. So this is how this Maharaja took advantage of the situation, probably better no mock at such people!

But he was not a bad man and he could also be very generous! He once gifted his Boulogne Hispano (chassis 10651) to his friend, the Maharaja of Rewa (shown below). Now that is what you call a gesture of generosity! 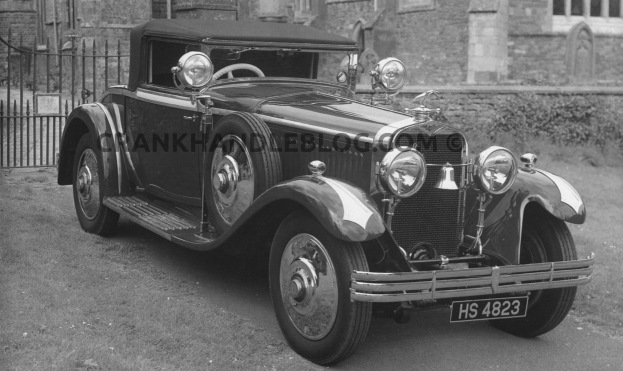 As an orthodox Hindu he was a strict vegetarian, so none of his exceptional cars – to name some, other than his Hispanos: Rolls-Royces, Bugattis and Lanchesters – had any trace of leather in them. The upholstery of his automobiles was thus always done in single-point French tapestry and even the normal leather gaiters that protect sections of the suspension were made of material other than leather.

The different cars he used for various state duties all had a silver plate affixed on either side of the bonnet, inscribed with the name of the duty, such as ‘kutcheri’ for court work. His shikar (hunting) cars had glass show cases, which could hold three weapons each, mounted on the footboards. One of his Hispanos had seats that could turn a full 180 degrees to facilitate shooting of escaping or attacking tigers. Wait a minute, wasn’t he a strict vegetarian?

All his cars were equipped with powerful lights and large searchlights for night hunting. These were exclusively Lucidus (on Boulogne 10651) or Stephen Grebel. The cars also featured cow-guards and bells, to supplement the standard horn, in order not to frighten cattle on the road … smart!

Time for some craziness again… HH of Alwar was very fond of practical jokes, like me : ) He bought his automobiles in batches of threes and ceremonially buried his cars when he was tired of them every third year! It is said that even today, if you dig around the hills of Alwar, you may not strike gold, but you might strike vintage! Would this be another of those jokes, or a true anecdote?

Yet another story concerns a fabulous palace he was once building and the entire ship carrying the furniture, fittings and fixtures for the palace was sunk during World War I, together with a fleet of cars he had ordered from Europe. So if you are bored, look for those sea-finds or burried-finds!

Jai Singh died at the age of 55 in Paris and he was finally allowed to return to Alwar, the final destination for his death ceremony known as shraddha.

His extraordinary, custom-built, ceremonial Lanchester – mentioned in a previous article – built on an extended 14 feet 10 inch long chassis, which was a true copy of the British coronation coach, with gold carriage lamps, carried him on his last journey. This ceremony was witnessed by hundreds of his people, women and children weeping and crying loudly. Richly jewelled Colonel HH Raj Rishi Shri Sawai Maharaja Sir Jai Singhji Veerendra Shiromani Dev Bharat Prabhakar Bahadur of Alwar left this world in a peaceful fire.